Blog - Latest News
 / News / The Ministry of agriculture of Russia has summed up the results of six... 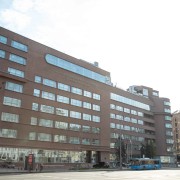 A new dairy complex has been opened in the Kaliningrad region